My ego almost stopped me doing my yoga teacher training. I had a shoulder injury caused by doing chaturanga incorrectly for a long time and I couldn’t even consider the thought of starting a course at such a low technical par. At that time, I thought that yoga was primarily about performance in asanas, and as part of the signature sequence – the sun salutation – I thought I’d get marched out of the room for not being able to do all of it.

The yoga teachers I spoke to beforehand told me the injury was a good thing, I would learn a lot from it, that it would be instructive, and that I would gain a greater body awareness through it. I thought they were just trying to make me feel better about everything but in the end they were right. So when a fellow Yin Yoga TTC student recently shared her anguish online with the group about having a knee injury, I was the first in to tell her the same things, that it would be instructive and awareness-raising, but really I knew that the best thing to come out of it would be a greater kindness to her body and therefore other people’s bodies in her classes. She and I would be more able to deal with people who are nursing injuries or are restricted from certain movements. And we would learn that not being Best in Class is sometimes the greatest lesson of all. 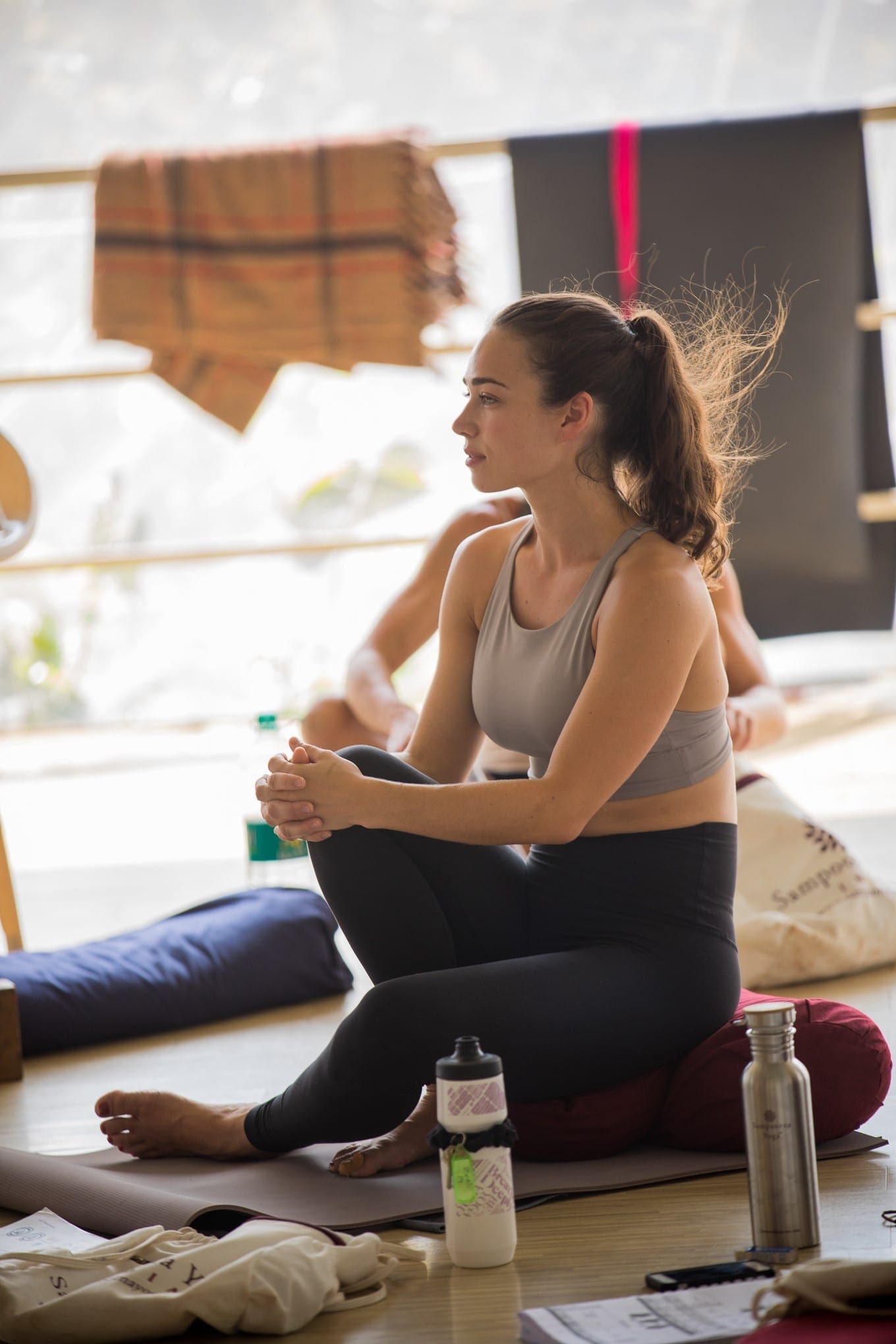 When I turned up at Sampoorna – Yoga Teacher Training School in India, I was full of it. I’d had a long career in publishing, directing teams, authors and illustrators, and before that I’d taught ballet. I couldn’t wait to get through the door and show what I could do. Boy, was I surprised when I found that it was a struggle. Why did I find it so hard to stand in front of people and cue them into downward dog, when this was a pose that came so naturally to me in everyday life, and I was so used to directing, managing and pitching to people? It felt like I was learning another language and the note I was given by my teachers over and over again was that I was too quiet. Too quiet! Me! I almost didn’t know who I was that first week.

I’m in awe of the non-native English speakers who take the courses here – not only do they have to learn how to cue people into poses verbally, they also have to become fluent teachers in another language. It was bad enough for me in English, learning how to speak again. One of the teachers on the current Spanish-language course at Sampoorna told me that she did her Yoga TTC in English and then had to go back to Spain and learn how to translate everything she’d learned back into Spanish. If I’d had to do that, would I have even taken the course?

I think every one of us on my 200-hour Yoga TTC at Sampoorna walked in wanting to make an impression of some sort, whether it was with our public-speaking skills or our ability to do Bird of Paradise or a headstand. By week two, we started to realise these things meant nothing if they didn’t come from the heart, from a deeper connection with ourselves – they lacked authenticity. I realised that the persona I’d had in my previous publishing life was not actually the real me. It was a persona I’d put on to come across as professional and a leader in London. It was made up of a lot of fancy words and a whole lot of puff. The person beneath all that is a far humbler person from Wales. Thankfully the course brought her back to me.

The authenticity thing had other effects on my life – I decided to stop colouring my hair and wearing make-up (ok, still a little bit of mascara) and be the real me instead. I stopped drinking. People seem to like this version of myself. I like her more too. Towards the end of my 200-hour Yoga TTC at Sampoorna, I did start to see a kernel of her appearing and after the course she continued to emerge. Now I’m back at Sampoorna, having completed the Yin Yoga TTC, I’ve had to learn yet another language – one that is slower, more meditative than the one I learned to use in the Ashtanga-Vinyasa course. I had to humble myself yet again in the face of this new discourse and take it slowly.

The thing is about egos is that they are multi-layered and very stubborn to shift, so I’ve decided to pull mine apart one layer at a time. Just being aware of what you are bringing to the table is a start. What are you trying to prove by doing a perfect chaturanga and who is it you’re trying to impress? I found it useful to try and answer these questions. Who is sitting in front of us, marking us out of ten for our ‘performance’? No one. Certainly not the teachers on the YTTC. That’s the last thing they’re looking for. They want you to demonstrate a deep understanding of the poses, not how great you are at them. And they want you to teach from your heart, not from the perfect script.

Sampoorna Yoga’s Teacher Training Courses are registered with Yoga Alliance USA & Yoga Alliance Professional UK. When you graduate from our school you will be eligible to register with them as a RYT, Registered Yoga Teacher, in your respective categories.